For those who are new to this Left and Right Brain voodoo, one of the key discoveries of new research on the brain is the dual nature of human thinking: verbal and analytical thinking, which is generally associated with the left side of the brain, and visual and perceptual thinking, situated on the right.

Neuro-psychologist Roger Wolcott Sperry received a Nobel Prize in 1981 for his work on the human brain. By separating the area of the brain used to transfer signals between the right and left hemispheres in epileptics, Sperry and his colleagues demonstrated that the two halves of the brain now had independent consciousnesses and responded to specific tasks. This research contributed greatly to understanding the functioning of the brain. This pioneering work was published in 1968. (The actual location of the two modes in the brain is still being argued. But it is sufficient for us to say that there are two modes of thinking: a linear, logical mode and a perceptive, creative mode. For our purposes we shall use the terms ‘Right Brain’ and ‘Left Brain’.)

Right Brain Writing is a skill like cycling or swimming, which once learned will not be forgotten, that you can continue doing even when you are eighty! (Challenge: Try writing an instruction manual for riding a bicycle!) Of course, like all skill sets, the more you repeat, the better you get.

You can learn to write in a relatively short time, although initial learning will be a struggle until the ‘ah-ha’ moment, when you will suddenly stop in the middle of whatever you are doing and say, “So, this is what it’s all about.”

Most people are willing to admit that they can’t draw. Drawing is often viewed as a God-given talent that one either is ‘born’ with or not. But few are willing to admit that they cannot write, although the last time they wrote anything interesting was when they left school at sixteen. The truth is most adults (professionals and non-professionals) have the writing skills of a sixteen-year-old (just as most adults have the drawing skills of a twelve-year-old) although they’ll probably get upset by this statement.

(Another story: about twenty years ago an editor of a local English daily asked me to write a weekly guest column for his newspaper. Subject was “anything”. I thought for a bit and asked, “And what level should I pitch it.” He hesitated, before replying, “Most tabloids in England pitch their papers at sixteen-year-olds.” I promised, “I’ll think about it,” then dropped it.)

The brain grows lazy from lack of use. Visual, auditory, and even olfactory data are observed, analysed, and classified according to our experience. We observe what we expect to see and classify the information according to common symbols we have learnt. In drawing, examples of these symbols are the stick man, the smiley face, the square car, etc. In writing, an example of these the symbols will be a nice man, a bad smell, a beautiful view, etc – all are judgmental adjectives without explaining much. What is so nice about the man? Describe it. Visualise him in your mind’s eye and tell the reader what he looks like. What did the bad smell remind you? Bring the view to life.

Seeing the world in clichés and symbols is not a conscious process. Our education and social environment have trained our brain to edit out any data considered superfluous in our writing (as it has done to our drawing). Unfortunately, this is precisely what is required of good writing – going beyond the cliché and the symbols; to describe things exactly as they are seen (that word again), perceived and felt.

No writing can be entirely Right Brained. The left side still plays the dominant role in the planning and structure. But it is the right side that is in charge when the characters start acting as if they have a mind of their own and the story goes places you never intended it to go (which is when you realise your writing works)! The trick is to be able to switch from your Left to Right zone effortlessly. In the Right zone, time will stand still. You will not be aware of your surroundings. People may talk but you won’t hear them. You will hardly have time to breath, let alone eat. You will be so consumed that you will be in another world. A crude word would be ‘concentration’, but when you enter that zone, you will know that it’s far more serious than that.

This programme is for anyone who has always wanted to write but never had the time, no matter what age or sex. Not everyone wants to write a novel. Maybe simply a good email to your estranged sister! Some people only want to understand what’s good writing and why it’s good, to understand the craft. Some people want to learn critique and review, instead of reading someone else’s in the media. Some want to become better editors or proof-readers. Some merely want to get more enjoyment out of their reading.

Writing can be supremely liberating and rewarding, but it is also a lonely journey. The irony of writing is that while it is ultimately for an audience out there, the journey is lonely. Like an Olympic athlete, you will find yourself declining invitations to all-night parties and three-hour coffee breaks. Your non-writer friends might find you strange but play along and manage it, if this is important to you.

1. Writing is about practice, refinement, and technique until they become automatic

2. Writing is the ability to express what you see out there, the feeling. (More often than not, too many words will spoil the soup. Language should fulfil the criteria “necessary and sufficient”.)

3. The storytelling is the R-brain activity. The L-brain will come in at some stage to clean up the language and the structure

• sense of close connection with the work

5. The L-brain does most of the grunt work, like an Olympic athlete who must do the laps and hit the gym. It’s not a lot of fun but it must be done. (Everyone wishes someone could prescribe two tablets, three times a day, to create a writer.)

6. Say it as it is, and not what you think it should be – no cliches and prejudice, like an artist who draws what he sees, line by line, stroke by stroke. Develop the ability to see from all points of view, from all sides, even upside down. If you’re a man, think like a woman and vice versa. Keep challenging yourself. Love every character in your story, even the dastardliest. In the end it’s believability (no matter how fantastic the plot and characters).

7. Write what you know. (If you have never experienced hand-gliding don't try to write about it.) If you can travel to a location to research, do it.

8. Writing is like swimming—if you’re a non-swimmer, you may fight the water and think you’re going to drown in the beginning but persist until you become one with the water.

9. Finally: Read, read, read, and read. Devour everything in sight. Develop an insatiable curiosity and hunger for knowledge. If you can’t do that, forget about writing for a living. 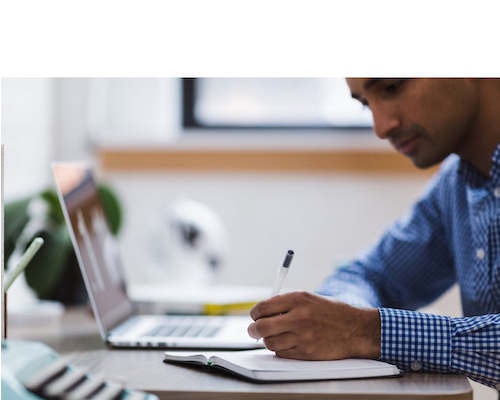 A. Write a “before” story (fiction or non) of about 2000 words. With this you’ll be able gauge your improvement (or otherwise) after the ten weeks of this programme.

B. Practice your random writing everyday preferably in the morning. (A word of caution. Don’t force yourself. Don’t make it seem like hard work. Your old habits will seduce and make you want to abandon your new habits. Close your eyes for a couple of minutes each time this happens and imagine yourself doing the assignment or exercise. How much joy are you deriving from it? Example: if you force yourself to wake up half an hour earlier, your body will rebel. But if you imagine yourself waking up half an hour earlier, fresh, and ready to do a bit of writing you always wanted to do, you will. If the new routine makes you feel a little tired initially, take an afternoon nap.)

C. Select a book, not a very thick one, you’d like to critique. Please don’t pick your favourite book, nor should you pick a genre don’t like at all. It could be a book you have read before or a new book you’ve just bought. This is not in a competition. (We will do the exercise later.)